How Often To Update Software - Part 2
Our Thoughts

Posted by Charlie Recksieck on 2022-09-15
We’ve discussed the basics of software update frequency in Part 1.

Now let’s get into some specifics we’ve discovered, and some major examples of apps updating frequently.

Our general take is that effective testing takes so much time, even if the new software version has only 2 changes or 200. It's completely inefficient to push updates out too often since it means you're spending like 400 man hours testing instead of 100 in a year.

Web apps are a little easier to test, with decent HTML practices then things shouldn't be very browser dependent. Web sites are even easier - we don't really feel the need to save up fixes for months before deployment. But locally-installed apps have so much more complexity and have more dependencies on platform and what else may or may not be on that computer. We dedicate a lot more testing time towards native apps like this.

WordPress - Yes, they have patches all the time. That's a good thing. Security is important. In fact, it's the sole reason we sometimes recommend a CMS system like WordPress, since they worry about security issues. But the version changes of core WordPress, like version 2.5 to 2.6 broke an awful lot of plugins and themes that are out in the world. Yes, those plugins and themes are third-party products, so why should WordPress care? It ended up as a problem and they really did care.

iTunes - They tend to not do the little patches, it's a full update each time. It seems a little frequent, for my taste. It can also be frustrating because it seems like there aren't new features in new versions. That's likely from another part of iTunes (videos, podcasts) that I don't use. iTunes covers so much ground and has 5-10 discrete feature sets that if you just use it for music, then perhaps 9 out of every 10 updates have no visible effect for me.

Firefox - Another program that updates a LOT. Hats off to them that most updates really are completed quickly. That said, it is annoying sometimes that it just seems like Firefox is opening very slowly with no warning that it's updating.

SiriusXM - I have no idea what they're fixing or enhancing when they make these regular updates. But until they figure out a way to make innocuous patch changes quickly while needing the car to be running and still let you use the product, we're stuck with this.

Obviously, to do as much as you can automatically and behind the scenes without disrupting your customers is the ideal. If you can't, then get smart about bundling your changes into rarer updates.

When you allot your testing time, may we suggest you take whatever amount of man hours you come up with and increase it by 50%.

The best advice we can give us that you create "release notes". When the update starts, begin with a splash screen listing the improvements that you made. For starters, transparency is almost always a good thing. 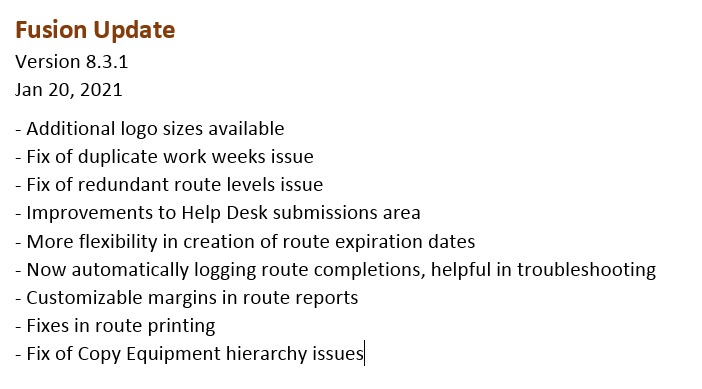 Above are some release notes for an update for a factory maintenance product of ours. Listing everything that's included is good policy. It turns what could be an intrusion to some into a positive, "warm and fuzzy' opportunity to show that the product is being treated and maintained professionally and proactively.

Some of the issues fixed in that above example were discovered and suggested by end users. When those people see this message, they feel like their concerns have been addressed.

As we've said before, fixing problems can actually engender more customer loyalty than never having errors. Strange, but true.

For an electric power company client, software updates are run on a script for each user in the company internally. We always have our IT team there send emails to all users that they upgrade is happening, will be kicked off automatically the next time they open the program and we list all of the fixes and new features. Again, it's informative, proactive and also good P.R. for the entire development team.

And as always, if you want our two cents on things, feel free to reach out to us.