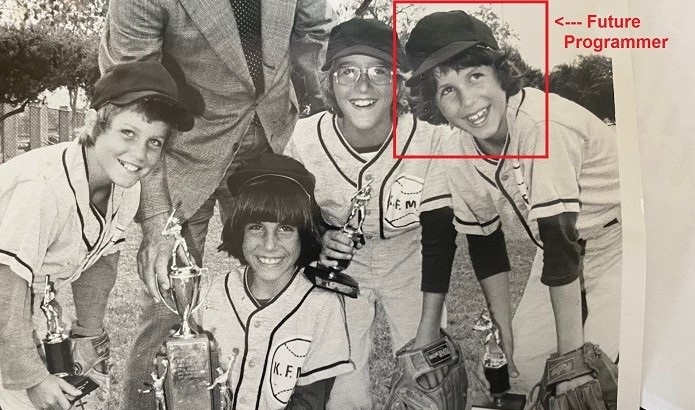 Destined To Work With Data
A Software Designer's Origin Story

Posted by Charlie Recksieck on 2022-07-14
It really should be no surprise to anyone in my family that I ended up working with data (and software), even though I majored in Russian Civilization in college. For this week's blog post, I thought I might detail some parts of my software developer origin story.

As a kid, our family had a closet which will filled with books on shelves. This is back when reading was on paper. As the precocious youngest child, I took it upon myself to put together a checkout system of all our books on index cards. If somebody was late bringing something back, they'd get a 2-cent-a-day charge just like the public library. I think I even instituted the Dewey Decimal System in there.

I also loved inventorying the groceries in our fridge and cupboard. I'm sure my mom thought it was just plain weird but she did appreciate my help when it was time to make her shopping list.

Growing up, I played baseball from tee-ball through high school. Hanging out at the baseball fields all day was my regular Saturday. Four fields of leagues for each age, and the girls Bobby Sox softball field was where it was at, plus the snack bar. I always loved keeping score in baseball since my dad showed it to me. And I've always prided myself on keeping a clean scorebook.

So, I volunteered my services to George Wernham, the wonderful older man who maintained those fields. I was in charge of all scorekeeping - I think I worked for something like $1-2 per game and a discount on Otter Pops at the refreshments stand. I had other kids subcontracting for me, then I'd take the books home at night and calculate all players averages and stats. This is long ago that I'd type them on a manual typewriter, all to post them on the snack bar wall each week. Advanced metrics were a gleam in Bill James' eye at that point, but I did introduce On Base Percentage and Slugging Percentage to my hometown.

Additionally, I played a bunch of dice-rolled sports simulation games and Strat-O-Matic in my spare time. I kept meticulous season stats. On a family RV trip I pretty much played out and recorded a model of the 1979 American League season.

Looking back on it, this all seems a little insane. But in the pre cellphone and internet era, we had a LOT of time available to us. And it not only innately led to me developing an organized programmer's mentality but it absolutely improved my math. In the comparison part of the math SAT test, I remember a greater-than-less-than question about 30% and 4/13. If you've calculated enough batting averages in your life, then you know that 4 divided by 13 is .308 as well as you know 2 plus 2 is 4.

Yes, I jumped from major to major at UCLA. We tried anthropology, literature, political science, communications but eventually a counselor told me, "These classes all have to add up to something so you can get out of here." Based on me taking some Russian language and a couple of Russian Literature classes, we figured that my fastest was out was a Russian Civilization major.

Meanwhile, I'd taken on programming class in Basic. I liked it ok. But I also was working 15-20 hours a week as a undergrad at the Institute For Social Science Research on the UCLA campus. It was an easy enough and great job to have while going to school. There was where I met my friend and programming mentor Marty Pawlocki who was a programmer for a library science institute on our floor.

Marty was a great guy, he still is. I see him when in Los Angeles for Chinese food with his wife. He got me started on rudimentary programming in dBASE III which was still a database with a programming API to manipulate data. (Sounds like SQL, anyone?) Starting then I'd fart around on a lot of projects, like documenting my CDs and an early attempt at a random poetry generator.

After UCLA I moved to Aspen to chill out for a year or so. Like college was so stressful. Anyway, within the year the Soviet Union had collapsed and along with it about 40% of everything I had studied in college.

Upon returning to San Diego my first job with benefits was managing a recreation center and coaching basketball. A fun and great living for a 23-year-old. Meanwhile, I kept tinkering with my random generated poetry program, all in dBase III.

I'll write another blog on it sometime and see if I can find the old code from a very old hard drive in my computer graveyard. That said, it was pretty cool. I analyzed sentence structure in poems to come up with about 70 possible structures (e.g. Phrase-noun-verb-adjective-noun or Noun-talkingverb-determiner-noun-verb-adverb or just VerbInifitive). I had something like 600-800 available words and it really came up with some gems. The output resembled the poetry of Stephen Crane. My friend Phil Hay and I got so obsessed with it that we started thinking that some of the poems were actually pretty profound.


One Night At A Party

I was talking to a guy at a mutual friend's party and we had a great conversation. A great guy, Jason Kagel who turned out to be the sharpest programmer I've ever met. Jason was moving within the company to the St. Louis office and wanted to find a replacement here.

Even though I had no professional software experience, he had them hire me for a low entry salary and see if I could learn. They put me in an office with the product, a complex third-party AutoCAD tool for electric utility design for two weeks and I was just to teach myself how to use it and support it. Such a great call by Jason. To me, that's the best test of a potential employee that I've ever heard.

It all worked out, I started in tech support, then product configuration then programming as we got by Autodesk and I was off and running with a career.

All of that and my whole career and business came from that conversation with Jason and I'm sure it was me talking about the computer-generated poetry that had him say, "We're hiring this guy."

To this day, even though I'm in software professionally, I still get a personal thrill from a good dataset. In vacations to New Orleans Jazz Fest with a group of friends, one of my favorite aspects is Danny's overly complex spreadsheet of destinations and expenses.

I still get a thrill about changing something in a file here, pressing Build, then Deploy and voila - suddenly an app THERE has a brand new function with microseconds from me hitting Deploy HERE.