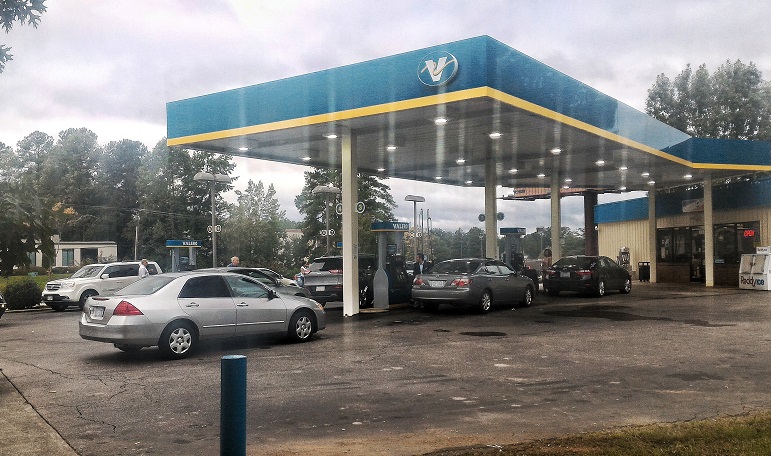 Gas Prices
My Two Cents To Keep In Mind

Posted by Charlie Recksieck on 2022-03-24
Gas prices are up. You can accurately say that at a lot of times but very much so right now; Putin is turning off Russian oil exports like a child in a timeout throwing his toys and MBS in Saudi Arabia may join in trying to extract pain from the American consumer unless he's granted immunity for something like 80+ murders.

This is a weird topic for a software developer to be chiming in on, but for better or worse I have an engineer's mentality and want to point out a few things that I feel are helpful when discussing the latest gas crisis.

Yes, the prices of gasoline seem high, especially if you're older. I can remember when it was sub $1.00 per gallon. Do you ever watch a 70s movie and see a gas station during a chase scene and it completely takes you out of the movie? Look at this screen capture from Die Hard below. 74 cents a gallon?! 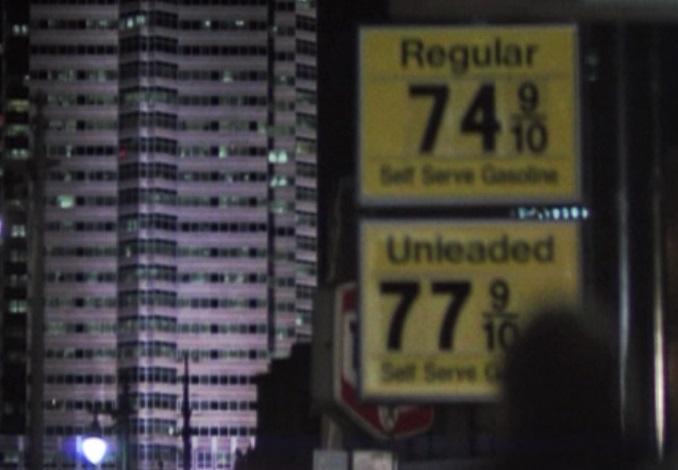 Despite how outrageous it seems, gas prices have increased pretty much just with inflation. In 1980, the average U.S. gas price was $1.24 per gallon. Adjusted for inflation, that would be $4.27 today in 2022. So the currently spiked cost of $4.43 really isn't out of whack. And a few weeks ago before Russia invaded Ukraine, the national average was $3.66 which was significantly BELOW the old 1980 price adjusted for inflation. Does that make it easier to deal with at the pump this week? Probably only a tiny bit, but it's true.

There are a LOT of federal and state taxes on gasoline. In the case of federal taxes, these are mostly earmarked for U.S. government highway and travel budgets. Additionally, sometimes a state that's experiencing a shortfall in money will slap on an additional 3 cents per gallon tax to raise income in a way that NOBODY ever seems to oppose.

If you're paying $5 per gallon, can you guess how much of that is in taxes?

Currently it's about 50 cents or 10% ... on average in the United States it's about 30 cents per state and 18 cents for the federal government. Here in California, the state gas tax itself is 50 cents a gallon. Surprise, surprise.

No comment from me good or bad, that's just something to remember when talking about gas prices.

Just yesterday I paid $6.10 per gallon at the pump. That's in San Diego, California, which is one of the worst places around to get gas.

Whenever there's a national news story about rising gas prices and it's breaking news with accompanying man-on-the-street interviews with outraged consumers talking about how crazy it is that gas is up to $4.00 a gallon, I'm always jealous. Whatever the outrageous price reported on the news is, that price is about $2 per gallon better than I'm paying.

Yes, California has a fairly large state tax on gasoline. It's also priced into gas companies' calculations. California will always pay more because the cost of living is higher in general. Also, corporations and the federal government has a long history of enjoying sticking it to "liberal California".

As far as San Diego goes, we do pay a little bit of a surcharge since we are the end of the line before Mexico on fuel delivery routes. San Diego is not "on the way" to anybody.

You may recall when Barack Obama took office in 2009 the economy was in a fragile state. The financial services industry put us all in peril, the U.S. automotive industry was legitimately close to going under and gas prices were high.

In one of his first press conferences I specifically remember Obama mentioning that one way for Americans to help do their part on energy and help their own pocketbooks was to check their tire pressure. This was laughed at in a lot of circles, at least ones rhyming with Nox Fews Channel. But it was a legitimate suggestion. Tires with less air in them can cost you about 3-4 miles per gallon. That is not nothing; 10-20% depending on your car. What it so ridiculous about telling people to keep your eyes on that, and potentially saving commuters $20-50 a month.

If there's one useful thing I'm going to say in this article is to remind you to check your tire pressure every 4-5 times you visit a gas station.


Is Gasoline Going To Be Dead?

You know anybody who has enough faith to get into an electric airplane any time soon? Me neither.

Gas production and use will certainly tail off, but not down to 0% as long as there are car historians, airplanes, lawnmowers. The internal combustion engine will become an endangered species, not extinct.

If you're not familiar with the architect / futurist Buckminster Fuller, at least take a quick read of his Wikipedia page.

At 18 I read his book "Critical Path" and it blew me away; it was basically his take on the history of human civilization, and one of his theses was that mankind has evolved from the scarcity of resources being the main driver of civilizations, wars, etc. and that we will all reach a sustainable existence once there is no need to fight over resources. (Which seems less like the track we are on in 2022.)

I remember that a big part of his prescription for society was through better city planning and design we could reduce oil consumption by huge percentages, even with prosaic solutions like traffic circles. As for traffic circles or roundabouts, not only do they significantly reduce traffic fatalities but also reduces energy consumption at intersections by 30%.

Now here's where it gets personal for me. I can be a little impatient on the road. I don't tailgate people, but I do passionately believe in efficiency. When I pull up to a very long wait at a traffic light, I invariably see a lot of cars hanging back about 8-10 feet from the car in front of them.

Let's say we've got a line of 40 cars waiting in the left-hand lane in that scenario. Near to the light is a left turn lane which nobody can get into from far back in the line. If just 10 of the 30 dummies hanging way back from the car in front of them could pull up 5 feet closer, that opens up 50 feet. If we were all 50 feet closer let's say 5 more cars could get into that left-turn lane and get through the intersection 3 minutes earlier. That's 15 total minutes of less pointless gasoline idling. I'm not completely confident about these exact numbers but my educated guess is that 15 minutes of gas idling is about 0.3 gallons of gas. We are talking about one 3-minute cycle at 1 intersection. Apply that to just rush hours for that intersection and let's call it 25 wasted gallons of gas. Multiply that times the amount of busy intersections in the U.S. and the numbers get staggering.

I'll put this another way: Slow and oblivious drivers are killing America!

If I ran for office, it would be primarily on a platform of enforcing the fast lane on freeways. You're welcome and I appreciate your vote.